​​He loves his foster mother Aliciana who he nicknames Pardoma.
He has many adventures in Symbolica, protecting the realm against the evil Pantagor and Rattar his co hort.
​But when he has time, he does whatever is in his power to find out what happened to his dear parents. 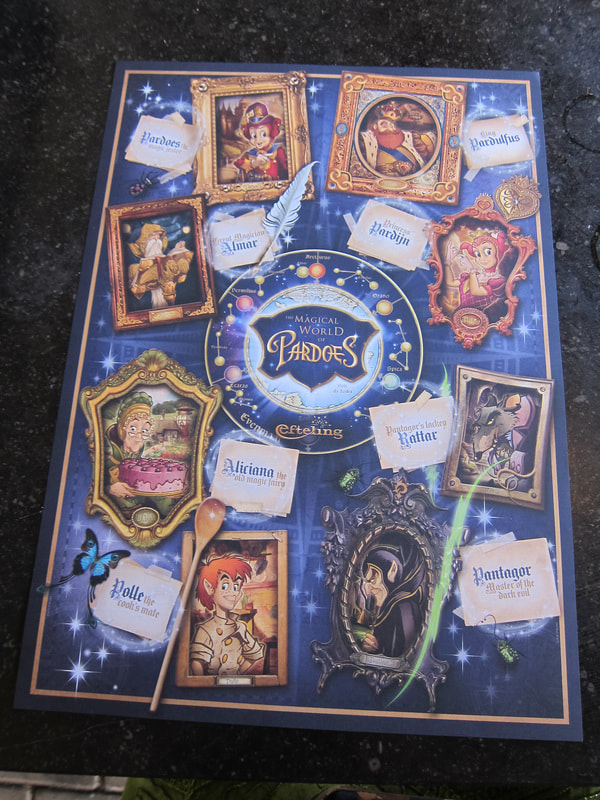 How Pardoes came to the Efteling 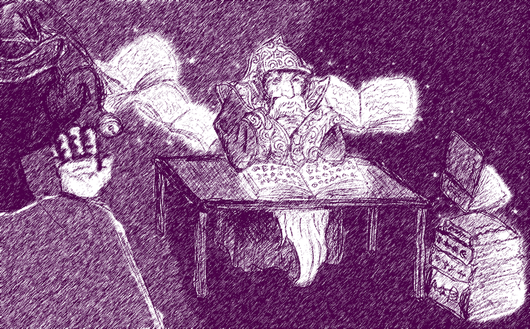 Symbolica is wrapped in a colourful mist of Purple, Orange, red, green, yellow and gold.

Look there goes Pardoes. He is carrying a large stack of really big books. They look very old those books. They are covered with a very thick layer of dust. Pardoes was skipping a bit so surely those books couldn’t be quite so heavy. Or perhaps Pardoes is really very strong? Pardoes skipped in the direction of a old man. A very long string of cheerfully coloured magic twinkles followed him. “Finished!” said Pardoes to the man. “Grand Magistrate I have already finished all of the books." Pardoes nonchalantly threw the books on the floor. Some of the magic twinkles follow. As if by magic the books land in a perfect stack very gently atop the grass. “Pardoes, you gave me a fright!” the grand magistrate said with his gruff voice. But you could see in his eyes that he didn’t mean it. “You’ve read the seven wisdoms already you say? Huh!! That can’t be. Let’s test you."

“Tell me, how much is 2µ7¿X3  times X4QvçQ? “ “Oh that’s GK’DJ€dLTlt !” Said Pardoes without missing a beat. “Hmmmm…” said the old man whilst stroking his beard. “I believe you are correct. And what is the magic number?” “Seven!” said Pardoes. “Let’s see if you remember any of the other things I have taught you!” And the Grand Magistrate asks Pardoes a couple of very difficult questions. Occasionally we will see a real thinking wrinkle appear on the forehead of Pardoes. But he seems to do well. “Well in all the magic twinkles” said the Grand Magistrate. “Pardoes you passed! You now know enough about the present, past and future. Or. Today, yesterday and tomorrow. I must think about this!” The Grand Magistrate retreats into his quarters. Pardoes sits and waits for the magistrate with a blade of grass between his teeth.

After about a day and a half the magistrate returns. He looks very formal. He is wearing a golden cloak. In his hands he is holding a black velvet chest. He clears his throat. “Pardoes” he said solemnly “it’s time. An important task awaits you. This task waits in the World of Wonders. In this fairy tale like surrounding in Kaatsheuvel you will be the guardian of imagination. In this task you will be helped by.. “The Grand Master clears his throat again.” The Golden Key Of Fantasy. This key opens worlds that are closed to others and gives insight to those who wish to see. This key speaks to the imagination. “and with a ceremonious gesture he presents the velvet chest to Pardoes. “There you go Pardoes” he says “In this chest lies the Golden key of Fantasy” “For all the magic twinkles Grand Magistrate” said Pardoes. “What are you acting all formal for all of the sudden? It’s so unlike you, I rather you’d tell me a nice story or something.” “But this is an occasion for formalities Pardoes” Smiles the grand magistrate. “Because this signifies our parting. I have trained you to be the keeper of the Key of Fantasy. You are now ready for your task.” “ But, but Grand Magistrate . What am I supposed to do if I don’t know the answer to something?”“You will always find me” the Grand Magistrate answered cryptically. “Wherever you are. Now come on! Get on the Key of Fantasy.”

The Grand Magistrate wave his arm around three times, sprinkles a few magic twinkles… and look! The Golden Key of Fantasy has grown twenty times bigger. “Get on Pardoes I will twinkle you to the Efteling.” “The Efteling??” said Pardoes. “The Efteling!! Wooohoo! Why didn’t you just say so?” He swung his leg over the key and the Grand Magistrate sprinkled it with Magic Twinkles. “Wooohooowoopdiedooo!!!” There goes Pardoes. On his way to the Efteling… 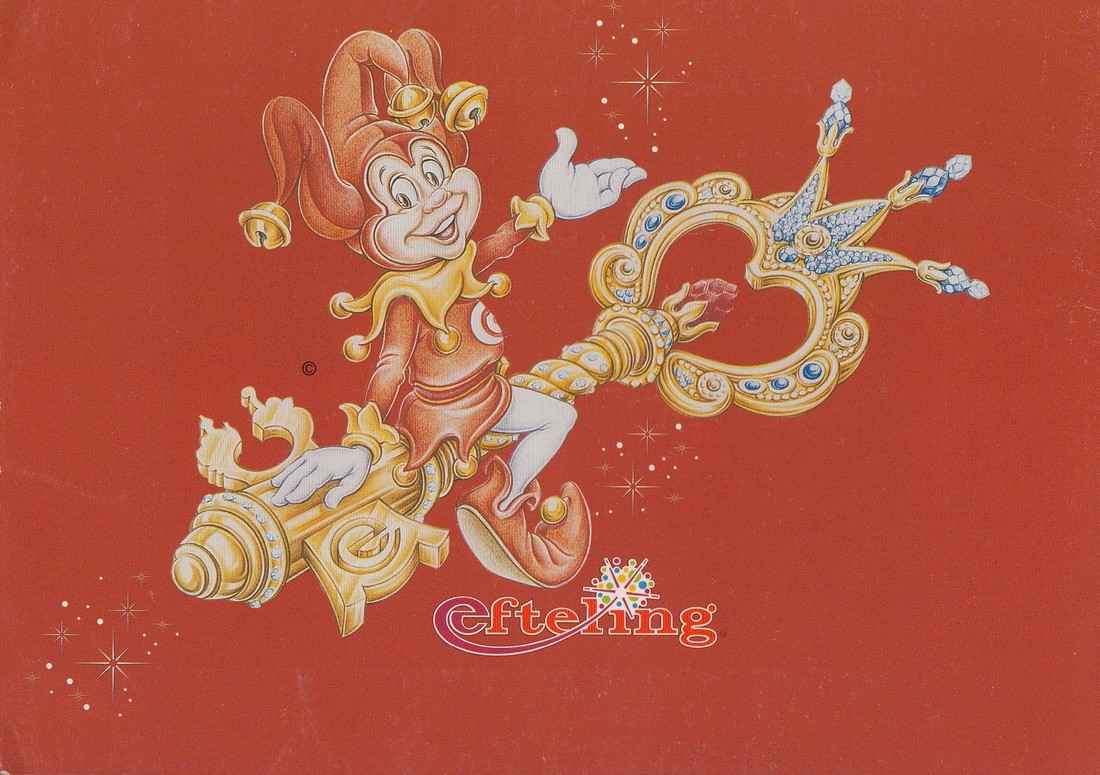 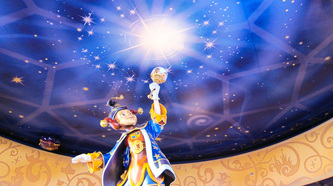 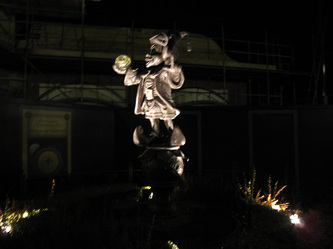 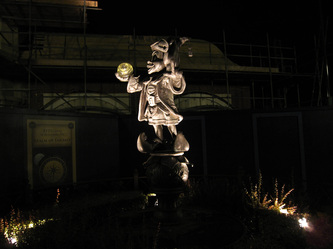 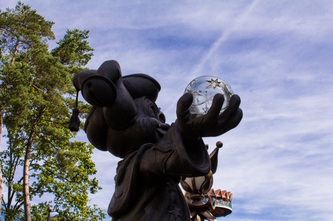 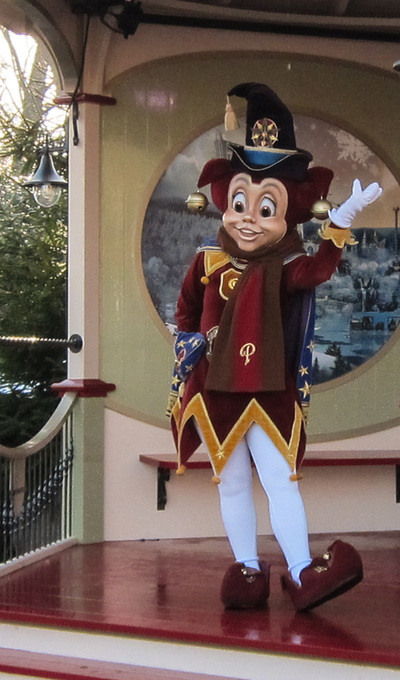 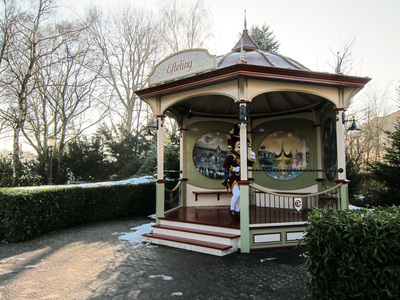 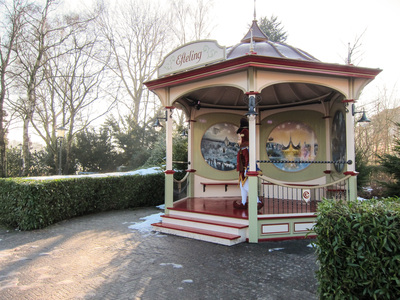 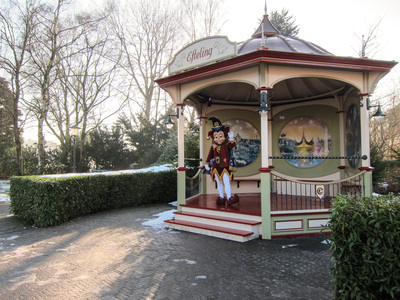 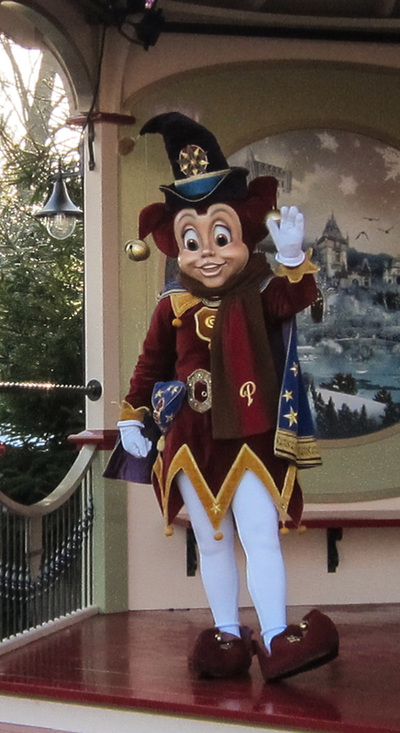 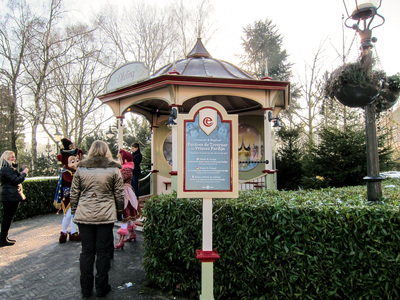 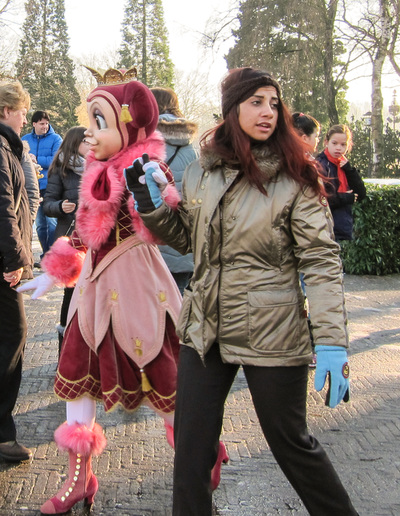 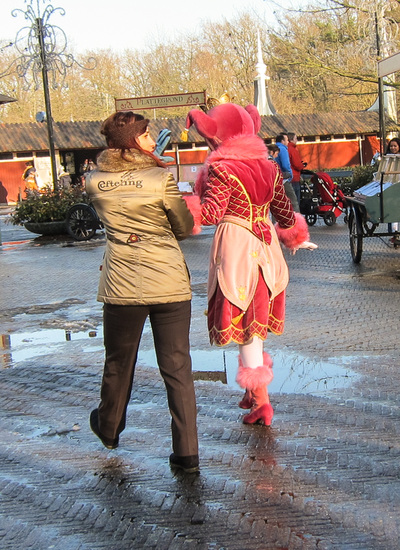 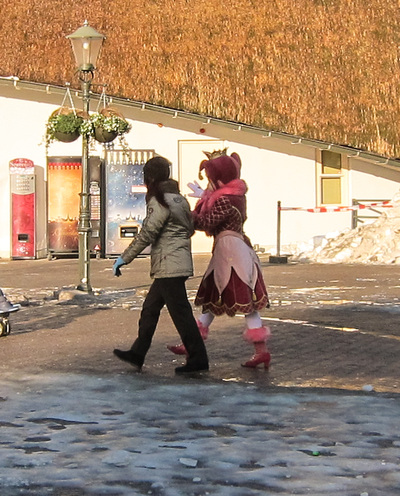 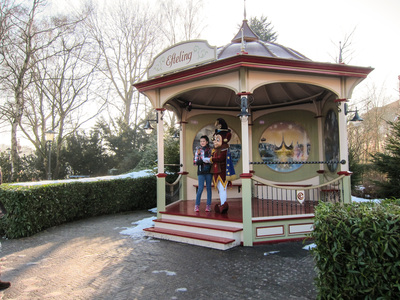 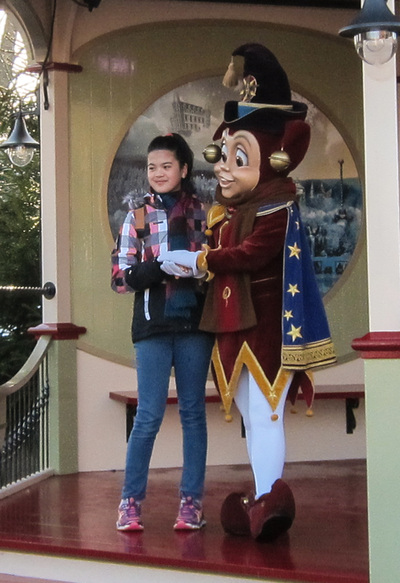 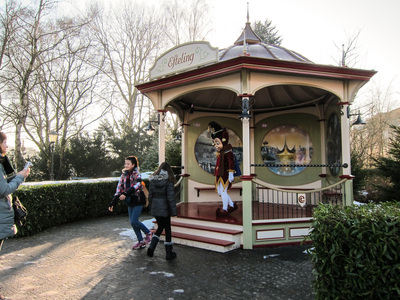 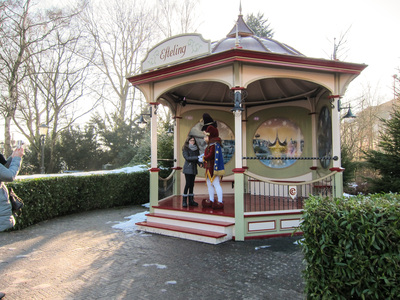 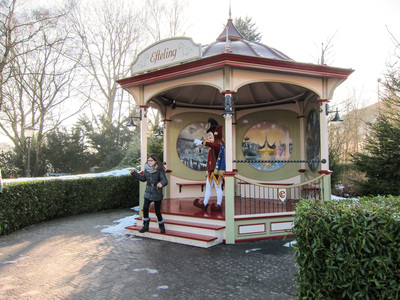 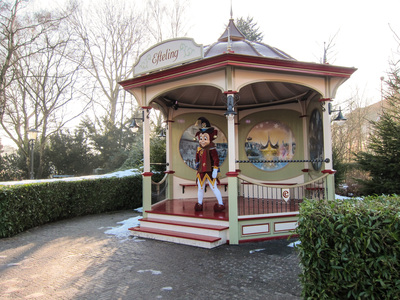 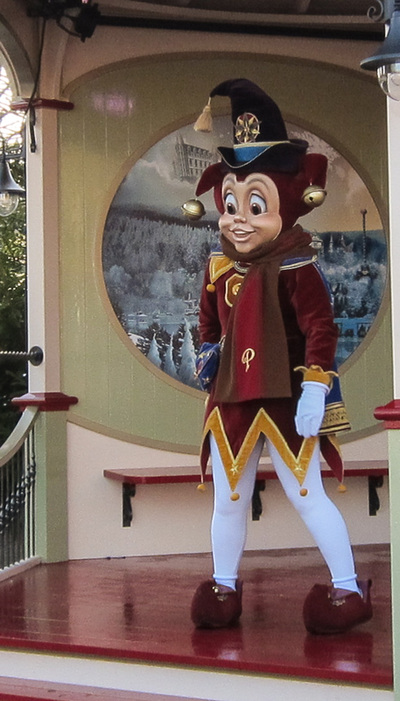 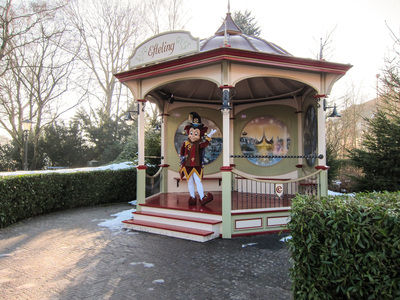 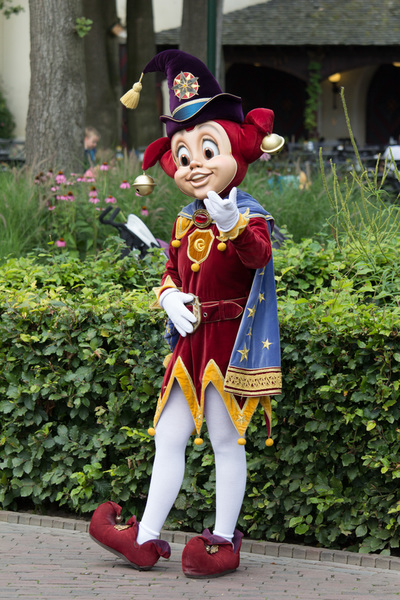 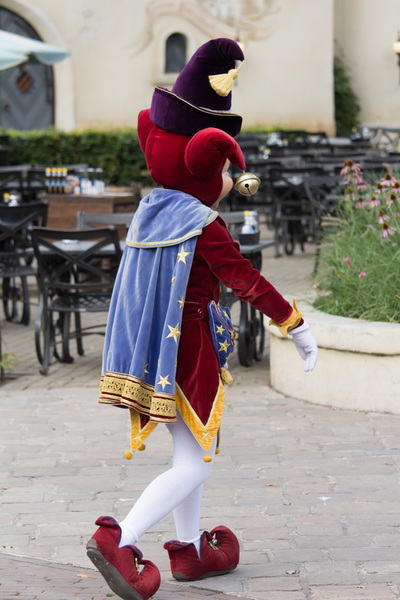 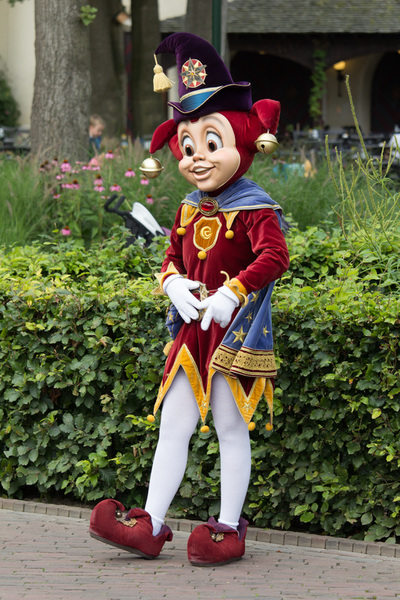 2000: Pardoes promenade and Brink is built 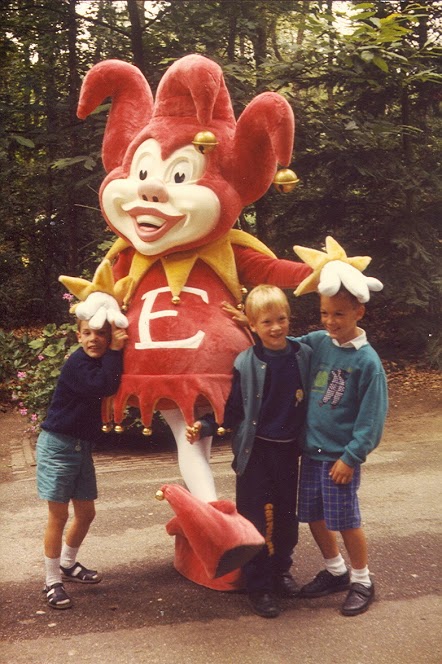